skip to main | skip to sidebar

The Art of the Imaginary Record, Part 2: Dogs, Cars, Clowns and Spaceships, The OMS years come to an end. 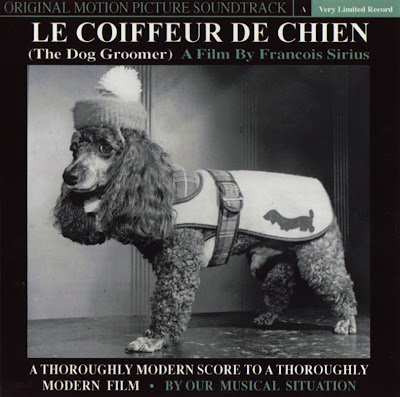 The cover art to Le Coiffeur De Chien, the seventh album from Our Musical Situation. This record, a concept story about a boy, a girl, and a stolen French poodle, contained the musical barking of Bette, the dear, departed pet of OMS bass player, Kevin.

A change in aesthetic arrived with the seventh full-length Our Musical Situation record, which appeared in early 2002. Out were the dolls, in were the dogs, at least for this special release, crafted to look like the soundtrack to an imaginary French film, Le Coiffeur De Chien (The Dog Groomer). Presented as a re-issue of a 1962 recording, it ushered in the fabricated history of the band, picturing them as teenagers, working diligently in their Seattle-based studio, creating the soundtrack to the latest “nu-wave” film by avant-garde celluloid expressionist Francois Sirius. As the liner notes state: Sirius was so convinced of their suitability to his project that he left them alone for four months to build the music, only telegraphing occasionally to ask “How my five American geniuses can be doing, oui?”
The next release took almost a year to see the light of day, an unimaginable lag for a band that had produced half a dozen records in their first year of existence. Titled The World is Getting Worser it contained tracks culled from a variety of sessions, recordings made between January and June of 2002. Another concept record, their third, it was inspired by my having spent ten days circling the island of Kauai on foot, sleeping on beaches, venturing onto the small island’s only circumbendibus road for the occasional thumbed ride. It’s eleven tracks charting the age of the automobile, from Henry Ford to global warming, the design was a far more austere event, involving found photography and other imagery. This was the first credited to The Strathblaine Blister Collective, an imaginary design group whose name originated with a very real childhood accident involving bare feet and a hot stove.
The eighth OMS release, Heroes & Vaudevillains, came out in the summer of 2003 and was the first art directed by someone other than myself, namely Eric Reynolds, who some might know as the associate publisher of the leading alternative comics publisher, Fantagraphics Books. These sessions, recorded on Dec. 14, 2002, were cleverly compiled into yet another concept record by Reynolds, drawing upon his keen knowledge of the legacy of such early pop masterpieces as Smile and Sgt. Pepper’s Lonely Hearts Club Band, creating the second, long-lost record by the young OMS, one that chronicled the life of a 19th century German carny.
Reynolds also produced the ninth OMS record, OMS…in Outer Space!, giving it the appropriate look of some science fiction pulp novel from the early 1950s.
Next came the inevitable “greatest hits” compilation, entitled Home Sweet Home 2001 – 2003, put together again by Eric Reynolds and featuring artwork by Gary Panter, perhaps best known for his work on Pee Wee’s Playhouse.
Following a busy year, 2003 seeing more than half a dozen releases from other imaginary acts on the A Very Limited Recording Company roster (see Pt. 3 for the full story on some of these), the next OMS release didn’t arrive until early 2004, this one being the Heroes & Vaudevillains CD/DVD Special Edition, a two-disc set which I designed, utilizing art from the original, and featuring the very first AVLRC-related video tracks (other than a primitive video track included on the band’s fifth album, The Old Pedal Effects Sessions). Filmed by Seattle video auteur “Nathaniel Nateman”, the three brief films put a whole new wrinkle to the ever-expanding fabric of Seattle’s only wholly-imaginary record company.
Yet another year passed before the final OMS record was released. A posthumous offering (the band having parted ways, amicably, sometime during the late summer of 2004), it was aptly entitled The End is Here! and featured a new and sparse approach to design from yet another mysterious graphics collective, one which I chose to call Nobody You Know Graphics.
But, of course, know you know the nobody you know, so there goes that mystery, just another part of the inscrutable AVLRC legend revealed. Enjoy!

PS For a more complete look at these record designs, click here for a fancy slideshow. 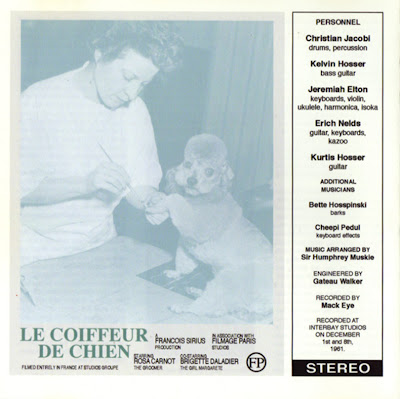 The inside cover to Le Coiffeur De Chien, styled to look like an old movie card advertisement. 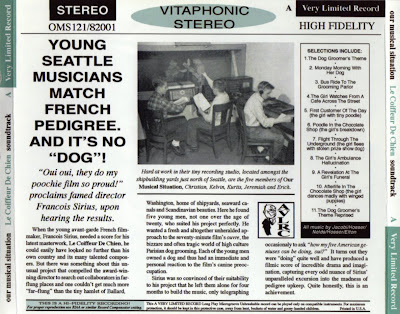 The back of Le Coiffeur De Chien, showing a teenage OMS hard at work in their Interbay studio (a fictional replacement for the very real “triangle studios”, birthplace of records like Nirvana’s Bleach, as well as home of Chris Walla’s Hall of Justice studio throughout the early part of the century, a building that sat just across the street from the OMS recording suite).

The gatefold of Le Coiffeur De Chien, featuring director Francois Sirius’s emotional recounting of his working with OMS on his 1962 film of the same name. 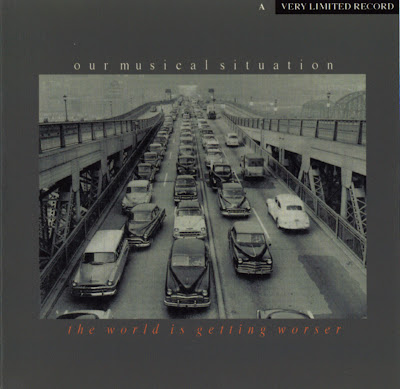 The cover art to the eighth OMS record, The World is Getting Worser(sic), a conceptual group of songs charting the world after the introduction of the automobile.

The gatefold art to The World is Getting Worser, culled from an old science fiction pulp digest. Artist unknown. 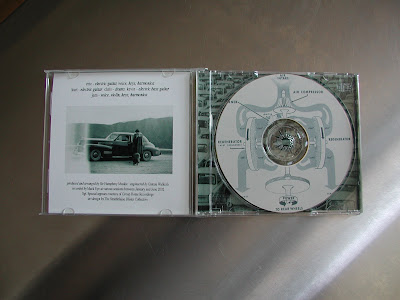 The CD itself, showing the full design of The World is Getting Worser. 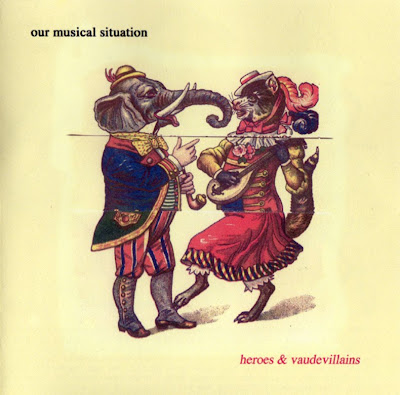 The cover art to Heroes & Vaudevillains, the ninth OMS full-length and the first designed by Eric Reynolds. 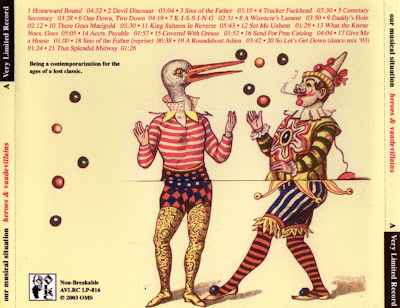 The back of Heroes & Vaudevillains, as designed by Reynolds. 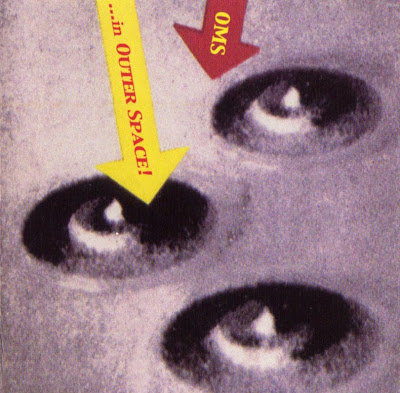 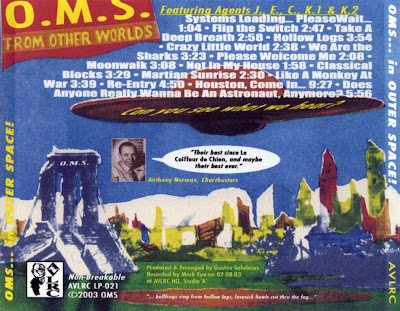 The back of Outer Space!, a candy store of sci-fi neurosis. 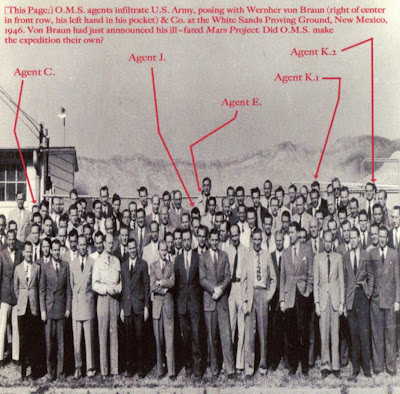 The inside cover to Outer Space!, pointing out the culprits responsible. 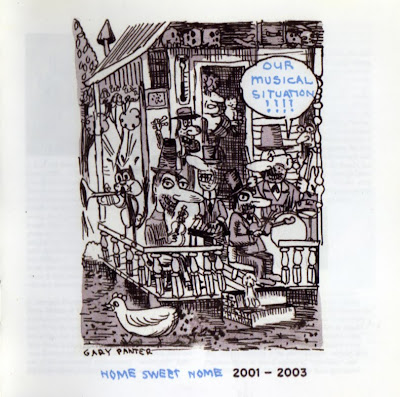 The cover to Home Sweet Home 2001–2003, the greatest hits package, put together by Eric Reynolds, with a little “help” from artist Gary Panter.

The first spread from the multi-paged booklet to Home Sweet Home, chronicling the storied history of Our Musical Situation.

The concluding pages of the Home Sweet Home booklet. 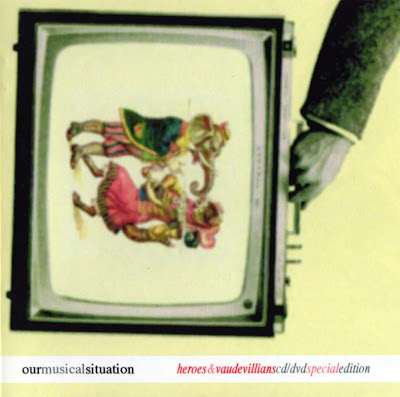 The opening spread of the Heroes Special Edition booklet. 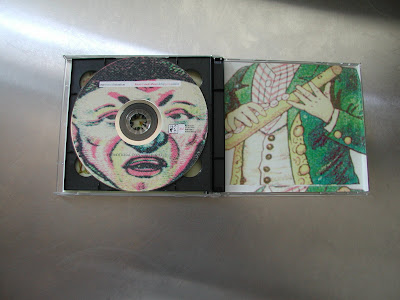 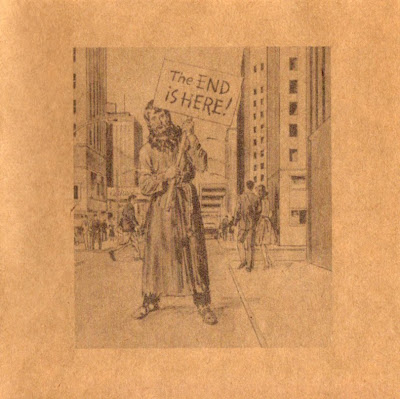 The cover to the final OMS record, the posthumously-released The End is Here!, from 2004.

The opening spread of The End is Here! picture booklet. 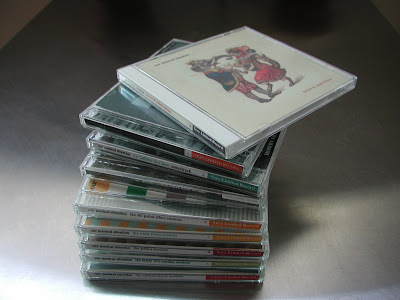 A view of the complete OMS library. 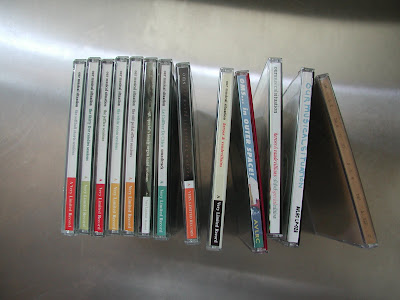 Another view of the collected thirteen OMS records, the largest entry in the AVLRC catalog. 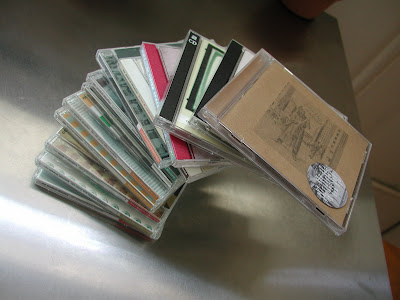 Yet another view of the proud product of the imagination.

I am always happy to take commissions for my popular watercolor series, Cartoon Jumbles, which feature two cartoon characters in a unique abstract amalgamation. I charge $125 plus shipping for each painting, produced on thick 8" x 10" manilla drawing paper. Simply choose your characters and e-mail me at postjwe@comcast.net and I will create for you your very own Jumble! See image link below for a gallery of existing Jumbles. 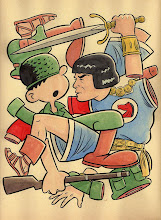 A LARGE SELECTION OF MY ORIGINAL ART AND COMICS ART IS AVAILABLE FOR PURCHASE AT SHOP, J.W.E.

COMIC ART COLLECTIVE
Also, find exclusive pieces at my illustration site
JEREMYEATONART.COM
My art can also be seen at
JEREMY EATON ART ARCHIVES at Flickr
And JEREMY EATON at MySpace

Please feel free to contact me concerning anything you've seen on this blog. I promise to answer as promptly as is possible.
postjwe@comcast.net

Which can easily be done. Simply contact me and ask. I will be more than happy to oblige, putting you at the forefront of all news and site updates concerning the myriad activities of J.W.E.

YES, I DO REQUIRE PERMISSION

To reproduce any of the content found on this site, that which originates from my pen, be it in print or electronic form. Simply contact me and inquire. Compensation is expected, where applicable.
Entire contents ©2010 Jeremy W. Eaton, except where noted.